Missouri’s “Bootheel,” the area in the state’s southeast corner composed of Dunklin, Pemiscot, and New Madrid Counties, can be attributed largely to the persistent lobbying of one man, John Hardeman Walker. Walker used his connections and influence to include the area within Missouri’s borders, persevering in the aftermath of the 1811–1812 New Madrid earthquakes. Walker is also known for laying out the town of Caruthersville in 1857.

John Hardeman Walker was born February 13, 1794, in Fayette County, Tennessee. John and his family left Tennessee for the town of La Petite Prairie, “Little Prairie,” about thirty miles south of New Madrid, in 1810. At this time the region was known as the New Madrid District of the Upper Louisiana Territory, and settlers were drawn to the growing economy of the area and cheap land.

The Bootheel in 1810 was a very different place than it is today. Low lying and regularly flooded by the Mississippi River, the area was largely swampland covered with timber. It was inhabited by Native American tribes and French fur trappers. Settlers of the area hunted, fished, traded furs, and raised cattle for a living. Little Prairie was established by French Canadian fur trader Francois Lesieur in 1794. By the time the Walkers arrived, there were over one hundred people living in the town, most of them French.

On December 16, 1811, the lives of the inhabitants of the New Madrid District would change forever. Violent shocks and the sound of thunder jolted people from their sleep. The earth moved like waves of the ocean, trees snapped in two, and the waters of the Mississippi River flowed backward. Little Prairie was at the center of the earthquake, resulting in the destruction of cabins and land. Because the shocks continued for another year, most of the settlers decided to leave the area—but not John Hardeman Walker. He saw an opportunity to accumulate more land and cattle, and as his property expanded, he became known as the “czar of the bootheel.”

By 1818, the year Missouri’s first petitions for statehood were received in Washington, DC, Walker had amassed what was described as a large plantation. The original petition to Congress did not include the land south of the town of New Madrid. But the citizens of these areas objected to being excluded from the newly organized state of Missouri. Their business and social ties depended upon connections with communities farther north, especially New Madrid. These settlers wanted to be associated with an established state rather than the territory of Arkansas. The second petition to Congress asked for a much larger state, including parts of what are now northern Arkansas, southern Iowa, and eastern Kansas. Finally, on March 6, 1820, Missouri’s boundaries were set by Congress, creating a smaller state and fixed to include the modified boundary in the southeast corner. 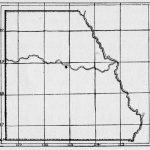 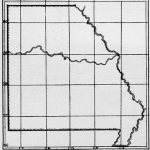 Historians are certain that Walker played a large role in determining the southern boundary of Missouri; however, it is unclear exactly how he did it. Walker knew the influential people of the day, including Dr. Robert D. Dawson, a member of the territorial council and the husband of his sister Melinda. The stories told about Walker include that he “wined and dined” the land commissioners, went to St. Louis to lobby the territorial legislature, and even went to Washington to speak to Congress. There is no evidence to support these stories, but it is possible that some parts of them are true. According to historian Floyd Shoemaker, “The tradition of John Hardeman Walker is more nearly true in spirit than in fact.” 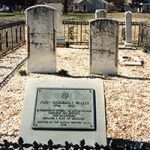 John Hardeman Walker lived the rest of his days in Little Prairie, which later became Caruthersville, the county seat of Pemiscot County. He married Sarah and they had one daughter, Mary, born in 1836. Mary was married to the Rev. George W. Bushey, who helped Walker lay out the town of Caruthersville in 1857.

Walker was the first sheriff of New Madrid County in 1821 and then became justice of the county court in 1823. He was also appointed county collector and overseer of the road from Point Pleasant to Little Prairie. He represented New Madrid County in the Missouri legislature in 1846. Walker was an active member of his community and a farmer until he died of cholera on April 23, 1860. Sarah and John Walker are buried in the John Hardeman Walker Cemetery in Caruthersville.

The following is a selected list of books, articles, and manuscripts about John Hardeman Walker in the research centers of The State Historical Society of Missouri. The Society’s call numbers follow the citations in brackets.