Born March 2, 1781, in Boone’s Station, Kentucky, Nathan Boone was the tenth and final child born to Daniel and Rebecca Boone. He grew up alongside his father, later following in his footsteps as a soldier and trailblazer. Just like his father, Nathan spent his childhood roaming the woods, only to return home with fresh game for the family’s dinner table. He also accompanied his father on long hunting expeditions.

In 1799, when Daniel decided to relocate to what is now Missouri, Nathan assisted with the preparations. He helped his father cut down a large poplar tree and hollow a canoe in which to move household items.

When Daniel set out for Missouri, Nathan stayed behind. He married Olive Van Bibber on September 26, 1799, and left for Missouri a few days later. Because Nathan did not arrive with his father, he was not entitled to a Spanish land grant. Nathan purchased 680 acres of land on the Femme Osage near what is now Defiance. He bought the land by selling his horse and saddle.

Nathan first built a small cabin but later erected a large stone house on the property with the help of his father. The house still stands. In 1803 the United States purchased the Louisiana Territory from France. Afterward, Nathan received steady work as a contract surveyor for the federal government. He surveyed lands in what are now St. Charles, Lincoln, Montgomery, and Warren counties. 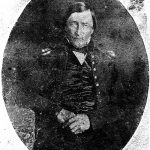 Around 1805, Nathan and his brother Daniel Morgan Boone began producing salt from a saltwater spring—or “salt lick”—near present-day Boonville. Salt was important on the frontier because it was used to preserve meat. The area became known as Boone’s Lick.

In 1808, Brig. Gen. William Clark asked Nathan to guide him on an expedition to what is now Jackson County. There, they built a fortified Indian trading post called Fort Osage and negotiated a treaty with the Osage.

During the War of 1812, Nathan served as a captain with the Missouri Rangers. He patrolled the frontier and helped build blockhouses for defense. Later, he served with the U.S. Dragoons and was commissioned as a captain. In 1820, Nathan was elected to serve as a delegate to the Missouri constitutional convention.

Nathan later settled in what is now Ash Grove, Missouri. He died October 16, 1856, in the log cabin he had built there some years earlier.

For more information about Nathan Boone’s life and career, see the following resources:

The following is a selected list of books, articles, and manuscripts about Nathan Boone in the research centers of The State Historical Society of Missouri. The Society’s call numbers follow the citations in brackets.