Enoch H. Crowder was a U.S. Army general and military attorney who constructed the Selective Service Act, commonly known as “the draft,” during World War I. The act, which Congress made into law in 1917, permitted the federal government to compel men to serve in the military. Under the Selective Service Act, millions of men were required to join the American Expeditionary Force (AEF), which led the Allied Powers to victory in Europe during World War I.

Enoch H. Crowder was born on April 11, 1859, in Edinburg, Missouri, to John and Mary Weller Crowder, the second son and third child of seven born to the couple. John Crowder was a farmer and Union army veteran of the Civil War.

As a child, Enoch attended Grand River College, the only school in northern Missouri, because public schools had not yet been established in the state. After he graduated at the age of sixteen, Crowder taught at a country school, but dreamed of going to college and practicing law. At his mother’s suggestion, he took the entrance exam for the U.S. Military Academy in West Point, New York. He finished second out of twenty-six applicants. The young man who received the top score was awarded the appointment, and Crowder was left to wonder how he would obtain a college education. Fortunately for Crowder, the young man resigned his appointment and Crowder took his place at the U.S. Military Academy in the fall of 1877. 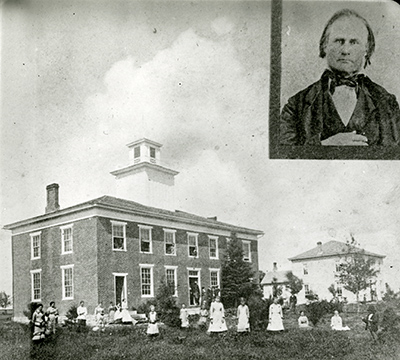 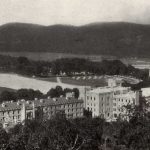 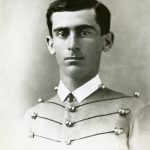 Crowder’s four years at the academy were challenging. He took classes in subjects such as engineering, foreign languages, geography, history, law, mathematics, and military tactics. Crowder participated in military drills and exercises, carried out guard duties, and endured hazing from other cadets. One of his former classmates remembered Crowder as “a boy of moderate ability and promise, displaying no special talents or even ambition.” On June 10, 1881, Crowder graduated from the academy ranked thirty-first out of fifty-four cadets in his class.

Newly commissioned as a second lieutenant in the U.S. Army, Crowder reported to the Eighth Cavalry at Fort Brown, Texas, where he spent much of his time watching for cattle thieves. He also studied law, becoming a licensed attorney in Texas. In 1884 he was reassigned to Jefferson Barracks at St. Louis before being sent to the University of Missouri to serve as a professor of military science. When not drilling and instructing students in military matters, Crowder studied law at the university and graduated with a Bachelor of Laws degree. 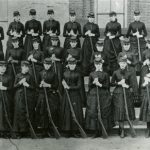 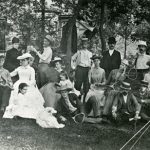 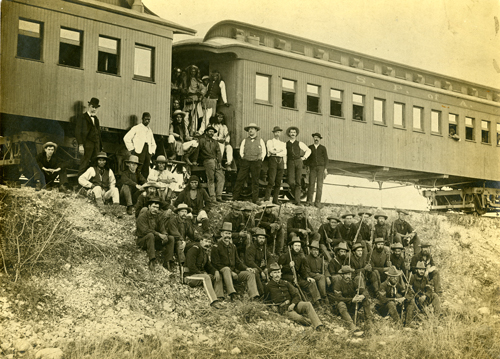 In the summer of 1886 Crowder was promoted to first lieutenant and rejoined the Eighth Cavalry, which was engaged in operations against Geronimo and his band of Chiricahua Apaches in the American Southwest. The Chiricahua were upset over their forced removal from their traditional territory in the mountains to a federal Indian reservation in the inhospitable desert. Geronimo and his followers eventually surrendered, though Crowder was not involved in their capture.

Briefly reassigned to the University of Missouri, he soon received orders to go to Fort Yates, North Dakota, where the U.S. Army was attempting to suppress the Ghost Dance, a Native American religious movement. It was the last time that Crowder took to the field; he spent the rest of his career far from the front lines as a “swivel chair” officer.

While in North Dakota Crowder came to the attention of his superiors in Washington, DC, when he successfully defended three army officers in separate court-martial proceedings. In 1891, after his promotion to captain, he was temporarily assigned to the U.S. Army’s legal branch, the Judge Advocate General’s Corps, and ordered to the Department of the Platte in Omaha, Nebraska. As a judge advocate (JAG), Crowder was the legal adviser to the head of the department, investigated and prosecuted court-martials, and took care of various legal matters. 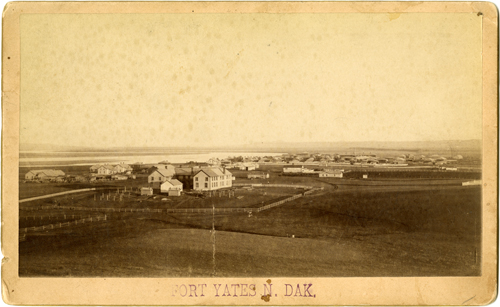 Promoted to major and permanently transferred to the Judge Advocate General’s Corps in 1895, Crowder’s dream of becoming a full-time attorney came true. When the Spanish-American War broke out in 1898, he served in the Philippines as a judge advocate. Crowder created a new set of criminal laws that made the Philippine legal system fair and impartial. He also served as an associate justice of the Philippine Supreme Court. After three years, he returned to the United States and was promoted to colonel. In 1904, when war broke out between Russia and Japan over territory in China and Korea, Crowder served as a military observer in the region. While overseas, he began experiencing health problems that plagued him for the rest of his life.

Whenever he had the opportunity, Crowder returned home to Missouri to visit family members. Although he never married or had children, Crowder remained close to his siblings and their children through long-distance correspondence that he wrote while stationed overseas.

In the fall of 1906, Crowder was ordered to the island of Cuba to help create a provisional government. Cuba had been a Spanish possession until the Spanish-American War when Spain sold Cuba, Puerto Rico, the Philippines, and Guam to the United States for $20 million. The island became a republic in 1902 after the United States granted it independence while reserving the right to intervene in its affairs. Crowder helped establish the framework for the Cuban government, revised and created new laws, and supervised elections.

In 1911 Crowder achieved the rank of brigadier general and became the head of the U.S. Army’s Judge Advocate General Corps. He exercised a great degree of influence on the army’s military justice system, rewriting the Manual for Court-Martial, updating and revising the Articles of War, and improving conditions in military prisons.

After Cuba gained its independence in 1902, Enoch Crowder was ordered to help the Cubans create a new government. Previously ruled by the Spanish monarchy, Cuba now had the opportunity to become a republic, in which citizens elect their government representatives.

This illustration is from Puck magazine. It shows Uncle Sam, representing the United States, standing next to a ballot box as he watches three Cuban men cast their votes for a new Cuban government. The first man is a loyalist who is casting his vote for a monarchy, the second man is voting for autonomy, and the third man is voting for a republic. Uncle Sam declares, “Gentlemen, when you find out what a majority of you want, I’ll help you to get it and keep it.” 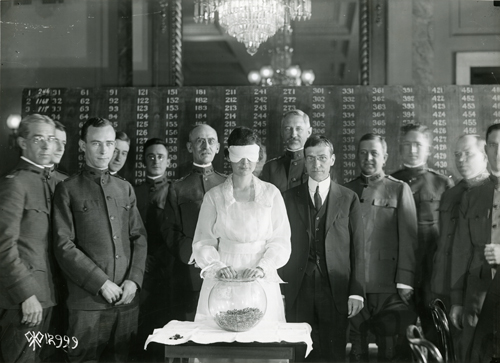 When World War I broke out in Europe, President Woodrow Wilson realized that the United States would need a larger military if the nation was drawn into the conflict. The American armed forces were much smaller than European militaries, and the federal government could not depend on enough volunteers stepping forward. Crowder and his assistants drafted the Selective Service Act, a piece of legislation that, once passed by Congress, permitted the federal government to order men into military service.

The Selective Service Act was not popular with many Americans. Some Americans did not want to serve in the military because they believed the United States should stay out of the war in Europe. Others thought that the poor would be drafted in greater numbers than the wealthy. The draft required men twenty-one to thirty years of age to register for military service. Local civilian draft boards oversaw the selection process based on a national lottery. Some men were not required to serve due to physical, mental, or religious reasons. Others chose to not sign up for the draft, risking imprisonment if caught.

Appointed provost marshal general by President Wilson, Crowder supervised the draft process during the war. For his service, he received the Distinguished Service Medal. Crowder then served one final term as judge advocate general before he retired at the rank of major general in 1923 after forty years of service. Upon his retirement, Crowder received numerous honorary degrees from colleges and universities including Columbia University, Brown University, and Harvard University. 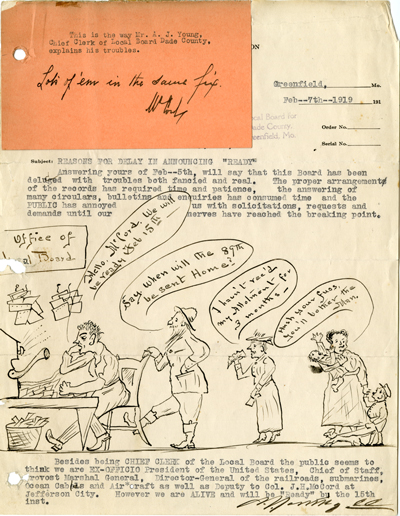 Although no longer a soldier, Crowder’s public service career continued when President Warren G. Harding appointed Crowder as U.S. ambassador to Cuba. After he resigned his position as ambassador in 1927, Crowder opened a law office in Chicago, but ill health forced him to retire three years later.

Like many of his fellow Americans, Crowder sustained heavy financial losses during the Great Depression before his death from liver cancer on May 7, 1932, in Washington, DC. He is buried in Arlington National Cemetery. Crowder State Park in Trenton, Missouri, is named in his honor, as was Camp Crowder, a World War II U.S. Army Signal Corps training center in Neosho, Missouri. 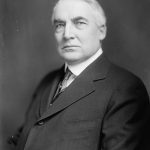 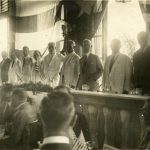 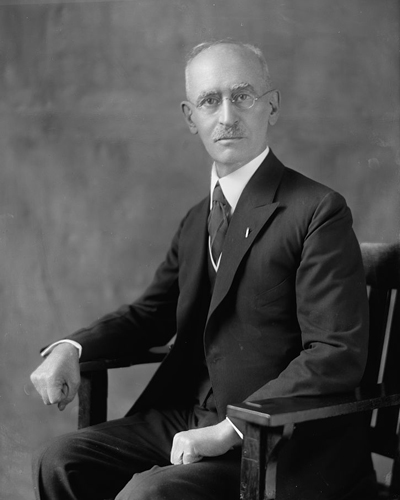 Major General Enoch Crowder remains the most influential judge advocate general in the U.S. Army’s history. He implemented important changes to the Judge Advocate General’s Corps and shaped the legal systems of the Philippines and Cuba.

Crowder’s key role in bringing about the Selective Service Act, one of the most important pieces of legislation in U.S. history, makes him one of the military’s most influential figures.

The following is a selected list of books, articles, and manuscripts about Enoch H. Crowder in the research centers of The State Historical Society of Missouri. The Society’s call numbers follow the citations in brackets.