Thomas Dooley was a doctor who organized medical aid clinics in Southeast Asia during the 1950s. His books introduced many Americans to the growing conflict in Southeast Asia, which would eventually result in the Vietnam War.

Thomas A. Dooley III was born on January 17, 1927. His parents, Thomas A. Dooley Jr. and Agnes Wise Dooley, were members of a prominent Irish Catholic family in St. Louis. Dooley attended private schools in the city and graduated from St. Louis University High School in 1944.

Dooley went to the University of Notre Dame for a short time before enlisting in the U.S. Navy. While in the military, Dooley served as a medical corpsman in naval hospitals in New York and California. He briefly returned to Notre Dame before being admitted to the St. Louis University School of Medicine in 1948. As a medical student, Dooley was inconsistent and often skipped class. He was forced to repeat his senior year.

After finally graduating from medical school in 1953, Dooley was not allowed to begin a residency in St. Louis because his professors did not believe he was ready. He decided to reenlist in the navy. From 1954 to 1955 he participated in Operation Passage to Freedom, which assisted refugees evacuating from communist North Vietnam to South Vietnam. Dooley acted as a spokesman for the cause. His experiences in Vietnam led him to write a best-selling book, Deliver Us from Evil.

Dooley’s anticommunist views quickly made him a popular figure not only in Catholic circles, but also in American society as a whole. His fame came at a time when many Americans were afraid communists would take over the government. Years after his death, it was revealed that Dooley was being used by the CIA for propaganda.

During a publicity tour for his book in early 1956, Dooley was quietly forced to resign from the navy because of his sexual orientation. However, he did not let this incident slow him down. Almost immediately, Dooley announced he was returning to Southeast Asia to set up a medical missions operation in Laos. The first clinic was established in the fall of 1956. While working in Laos, Dooley maintained a weekly radio program, That Free Men May Live, which was broadcast on KMOX in St. Louis. 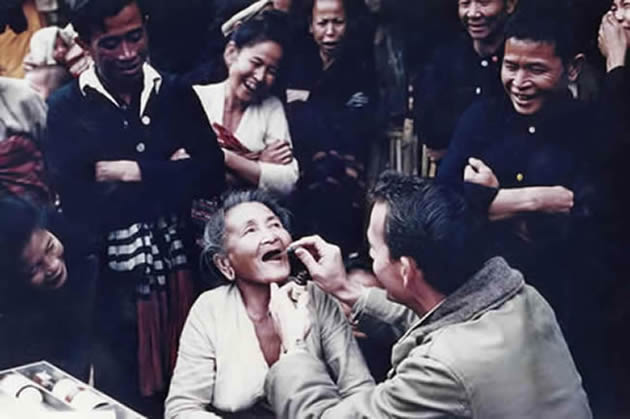 In the next few years, Dooley wrote two more books, The Edge of Tomorrow and The Night They Burned the Mountain, both about his medical work in Laos. He also focused on raising funds to expand medical missions throughout the world. The new organization was called MEDICO (Medical International Cooperation) and flourished in the beginning because of Dooley’s celebrity status as an author and public speaker. His popularity likely paved the way for John F. Kennedy to become the first Catholic president of the United States.

Unfortunately, Dooley’s success was brief. Diagnosed with an aggressive form of skin cancer in 1959, he died in New York on January 18, 1961.

Without Dooley’s strong personality to keep it going, MEDICO was soon absorbed by the relief organization CARE. However, Dooley’s humanitarian efforts continued to inspire others. When President Kennedy created the Peace Corps in 1961, he cited Dooley’s service as an example.

For more information about Thomas Dooley’s life and career, see the following resources:

The following is a selected list of books, articles, and manuscripts about Thomas Dooley in the research centers of The State Historical Society of Missouri. The Society’s call numbers follow the citations in brackets.