Edna Fischel Gellhorn was a suffragist, civic leader, and reformer who helped found the National League of Women Voters. She dedicated her life to helping and serving others through her work as a social and political activist.

Edna was born in St. Louis, Missouri, on December 18, 1878, to Washington E. and Martha Ellis Fischel. Washington Fischel was a physician, professor of clinical medicine at Washington University, and a cofounder of the Barnard Free Skin and Cancer Hospital in St. Louis. Martha Ellis Fischel was an educator who was heavily involved in philanthropy and civic work. The Fischels belonged to the Ethical Culture Society of St. Louis whose members believe in leading ethical lives “that aspire to the greater good of humanity.”

After graduating from Mary Institute High School in St. Louis, Edna attended Bryn Mawr College in Pennsylvania.  A natural leader from an early age, she was elected lifetime president of Bryn Mawr’s class of 1900, the year in which she graduated. Three years later she married George Gellhorn, a prominent physician and professor of medicine at Washington University in St. Louis. Together they had one daughter and three sons: Martha, Walter, Alfred, and George Jr. 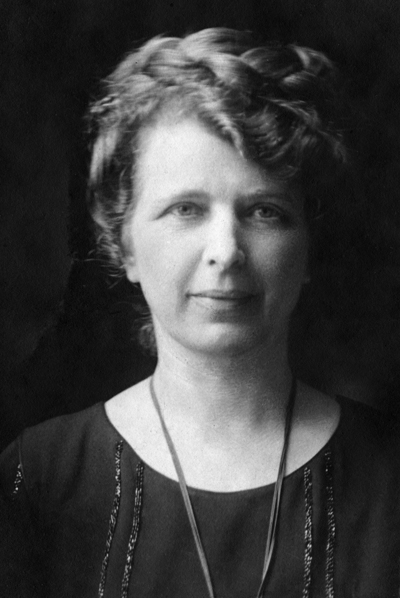 Although she grew up in a wealthy family and lived a comfortable upper-class life as a married woman, Gellhorn believed in the value and importance of helping others through public service. She, like her parents, became deeply involved in the St. Louis community. Early in her career as a civic activist she organized charity events, successfully lobbied for clean drinking water regulations, and helped secure the passage of a law requiring better safety standards for milk. She found her true calling, however, in the suffrage movement. 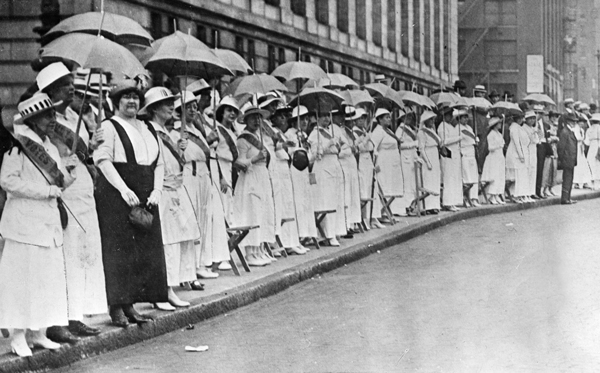 In 1910, Gellhorn joined the St. Louis suffrage movement, serving as an officer in both the St. Louis and Missouri Equal Suffrage Leagues. One of her most notable contributions was a political demonstration known as the “Walkless-Talkless Parade” at the 1916 Democratic National Convention in St. Louis. Thousands of women dressed in white with yellow sashes and umbrellas stood on both sides of the street and formed a “golden lane” that Democratic delegates had to walk through to get to the convention on its opening day. This event attracted national attention to the suffragists’ campaign for women’s voting rights.

When the League of Women Voters was founded in early 1920, Gellhorn was asked to serve as its first national president. She declined the offer, but did serve as the organization’s first national vice-president. She was also elected the first president of the Missouri League of Women Voters and served three terms as president of the St. Louis League of Women Voters.  Gellhorn’s style was to lead by example and do whatever needed to be done: she gave speeches, lobbied politicians, chaired committees, and even addressed envelopes. Later that year the Nineteenth Amendment to the US Constitution, which granted women the right to vote, was ratified and became law.

Throughout her career, Gellhorn demonstrated her belief in not only women’s equality but also racial equality. When the St. Louis league held a vote in 1919 to determine whether African American women could serve on its board, Gellhorn cast the deciding vote that opened the board to African Americans. In 1921, Gellhorn and the league left the Advisory Board, a group of St. Louis women’s organizations, rather than change its membership policy to exclude African Americans.

Twenty years later, when the league’s office was located at the Kingsway Hotel in St. Louis, the hotel staff told African American league members they could not use the public elevators; instead they would have to use the service elevators. Outraged, the league, led by Gellhorn, moved out of the hotel and into a new office rather than let its black members be discriminated against.

After women won the right to vote in 1920, Gellhorn continued to fight for numerous causes such as women’s equality, civil rights, and education. She was active in numerous organizations such as the St. Louis Urban League, Women’s Central Committee on Food Conservation, Smoke Elimination Committee, Consumer’s Milk Commission, American Association for the United Nations, the National Municipal League, Greater St. Louis Citizen’s Committee for Nuclear Information, and the St. Louis Board of Children’s Guardians. Gellhorn also served on the Missouri State Commission on the Status of Women and the Commission to Revise the Missouri Constitution. 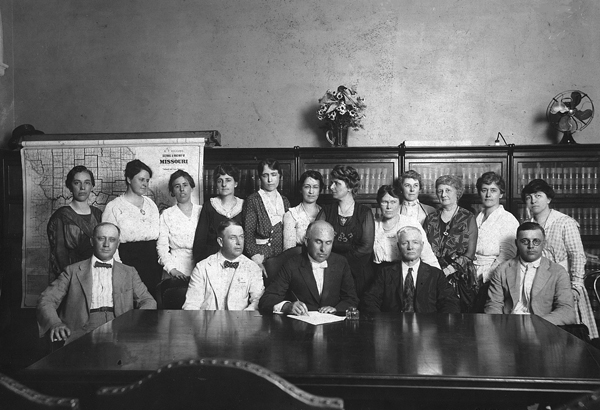 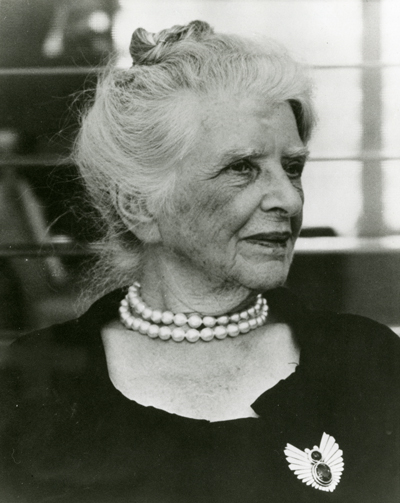 Edna Fischel Gellhorn never ran for or held public office, but through her optimism and hard work, she helped to better the world. In 1953 she declared, “I’m glad I was born in a time of stress. I’m glad to have lived through it. And I have infinite faith in the future.” Gellhorn died on September 27, 1970, at the age of ninety-one and is buried in Bellefontaine Cemetery in St. Louis.

After Gellhorn’s death, Senator Stuart Symington read a tribute in her honor on the floor of the US Senate. Symington remarked, “No person could have had more ideals and ambitions for her community; no one ever worked more tirelessly to achieve those goals.” In the words of her friend, journalist Irving Dilliard, she was “wise because her spirit was uncontaminated, because she knew no violence, or hatred, or envy, or jealousy, or ill-will.”

For more information about Edna Gellhorn’s life and career, see the following resources: