Born to wealth and privilege, Susan Shelby Magoffin was an unlikely person to travel the coarse and hazardous Santa Fe Trail. Nevertheless, circumstance and her spirit of adventure combined to make her one of the first American white women to travel the path connecting Missouri to Mexico. Much of what we know today about life on the trail we owe to the details Magoffin supplied in her journal.

The granddaughter of Kentucky’s first governor, Susan Shelby was born near Danville, Kentucky, on July 30, 1827, into one of the wealthiest families in the state. She grew up with servants and a proper education. When she was eighteen, she married Samuel Magoffin, a successful Santa Fe Trail merchant twenty-seven years older than herself. They married on November 25, 1845, and spent their honeymoon in New York. Instead of settling into a home near family, the Magoffins prepared for a trading expedition down the Santa Fe Trail.

With war just beginning between the United States and Mexico, it was a particularly dangerous time to travel the trail. According to Magoffin’s journal, however, she was excited about the trip. Magoffin began her very thorough journal in June 1846 as she and her husband departed from Independence, Missouri. Throughout the expedition, she wrote in it almost every day.

Life on the Santa Fe Trail was harsh. There were dust, flies, and bad weather, not to mention dangers posed by Indians, disease, fires, and flooded rivers. As the wife of the expedition leader, however, Susan could afford to bring many comforts with her on the journey.

Magoffin traveled with her servant, Jane, and her dog, Ring. She lived in a tent with a bed and mattress, a table, chairs, and even carpeting. Despite Magoffin’s familiar belongings, the landscape told her that she was far from home.

As the Magoffins traveled south, the green prairies and forests gave way to rocky deserts and mountains. When they reached the first stop at Bent’s Fort in modern-day Colorado, Susan discovered buildings constructed with adobe rather than brick or wood. The floors were dirt, and the ceilings were made of logs, with adobe used to fill the cracks. 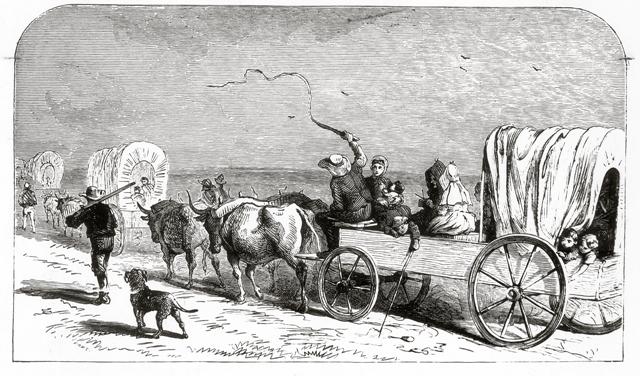 Farther down the trail, Magoffin discovered a great difference in the food. In Las Vegas, New Mexico, she sampled what is now known as green chili stew. She strongly disliked it, noting in her journal, “I could not eat a dish so strong and unaccustomed to my palate.”

The Magoffins reached Santa Fe in August 1846. Here Magoffin noted differences in the style of dress. In Susan Magoffin’s world, proper ladies wore skirts covering their ankles and blouses buttoned to the neck. The Mexican women, however, wore skirts showing their calves and low-cut blouses.

Communication problems persisted because Magoffin did not speak Spanish, and most of the people she met did not speak English. Although life was different in Mexico, Magoffin became accustomed to it. She liked her adobe home in Santa Fe, learned a little Spanish, and made friends.

On September 8, 1847, Magoffin made what would be the last entry in her journal. She later suffered an attack of yellow fever. While ill, she gave birth to a son who died soon after.

In 1848 Magoffin left Mexico on a vessel to New Orleans, and then went north to live in Lexington, Kentucky. She and her husband later settled at Barrett’s Station near Kirkwood, Missouri, in 1852. Magoffin never fully regained her health, however, and died on October 26, 1855. Her journal remains a valuable record on the development of the West.

For more information about Susan Magoffin’s life and career, see the following resources:

The following is a selected list of books, articles, and manuscripts about Susan Magoffin in the research centers of The State Historical Society of Missouri. The Society’s call numbers follow the citations in brackets.