Mary Alicia Owen lived her entire life—except for many travels throughout the country and abroad—in the town of St. Joseph, Missouri.  She was always interested in people and became famous for writing about the Native Americans and African Americans who lived in and around her hometown. Many of the books, stories, and articles Owen wrote were works of folklore.  Folklore is the study of people and their legends, religions, and traditions. She traveled across the United States and Europe to talk about the folklore of Missouri.  At one time Owen was called the most famous woman folklorist in the world.

Mary Alicia Owen was born in St. Joseph, Missouri, on January 29, 1850.  Mary’s grandparents, Agnes Gilmore Crookes Cargill and James Cargill, their four grown children, and two people they enslaved, moved to St. Joseph from what is now West Virginia in September 1843.  The town had just been founded and was still a small village of about 400 people. James Cargill built one of the town’s first gristmills and, as St. Joseph grew, he became a successful businessman. 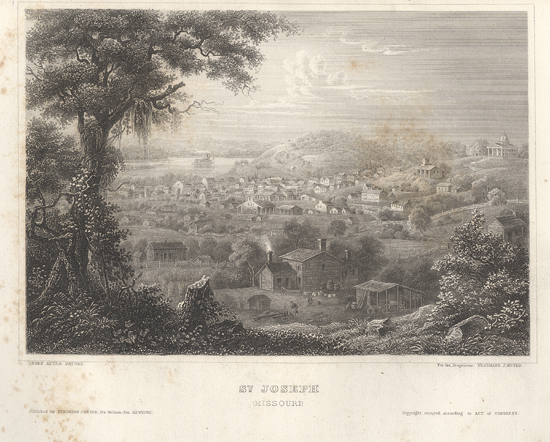 The Cargills’s youngest child, Agnes Jeanette Cargill, married James A. Owen when she was seventeen years old on August 3, 1848.  James Owen was a lawyer from Kentucky who moved to Missouri in 1846.  After their marriage, James Owen joined his father-in-law in the mill business.  During the 1850s the partners continued to do well and both became important members of their quickly growing community. The Owen family also began to grow.  Between 1850 and 1860, James and Agnes Owen had five children.  Mary Alicia was the oldest.  Her younger brother and sisters were named Luella Agnes, Herbert Alfred, Florence Alma, and Juliette Amelia.

As a small child, Mary lived with her mother, father, and grandparents.  At that time the Cargill family enslaved six people. Later in her life, Mary would recall how she loved to listen to the myths and stories told by the people her family enslaved.  As an adult, she wrote about one enslaved woman in the Cargill house, Mymee Whitehead, who was a conjurer.  Conjure, or Hoodoo as it is sometimes called, is the African American folk practice of using spells or creating potions to ask the spirit world for help.  Mary loved to watch “Aunt” Mymee prepare special potions.  She sometimes helped by getting needed ingredients from her grandmother’s kitchen. 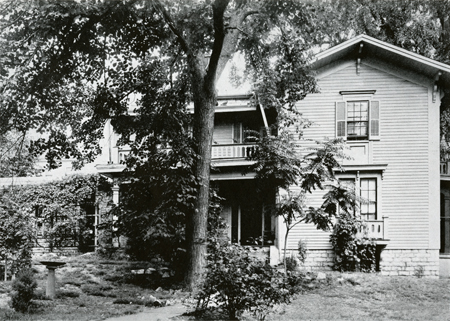 The Owen family built a large Italianate house at the corner of Ninth and Jules Streets in St. Joseph when Mary was nine years old.  Mary, along with her sisters Luella and Juliette, lived in the house for the rest of their lives.

When Mary reached school age, there were still no public schools in St. Joseph, so, for a few years she was educated in private schools.  Her education was interrupted when the Civil War started in April 1861. During the war the schools closed down and Agnes Owen taught Mary and her siblings at home.

The Civil War disrupted the lives of many people throughout Missouri and in St. Joseph.  For much of the war, Union troops controlled the town.  Citizens could not travel without the permission of the army. Because the Owen and Cargill families were enslavers from the south, Union supporters harassed them during the war.  Mary’s uncles were suspected of helping a Confederate officer escape St. Joseph.  Angry citizens burned down the Cargill mill and stole cattle and furniture from the home of Mary’s grandmother, Agnes Cargill.  One night, Union soldiers came to the Owen house looking for Mary’s father.  After thirteen-year-old Mary led them to a church where he was hiding, they arrested him and briefly held him in jail.

Mary resumed her studies after the war.  She attended Patee Female College in St. Joseph for three years.  In 1869 Mary traveled to Poughkeepsie, New York, to attend Vassar College.  At the time, most women’s colleges only trained young ladies to be schoolteachers. Vassar was one of the first colleges in the United States that gave women the same education as men. 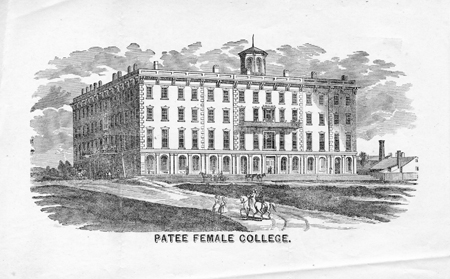 Early Career as a Writer 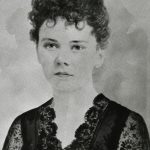 Mary Alicia Owen was twenty years old when she returned to St. Joseph after one year at Vassar College.  She had always been independent and did not want to get married and become a housewife.  In Owen’s time most wealthy women did not work outside the home because they did not want it to appear that their husbands could not support them or that they needed money.  Owen had always loved stories and enjoyed telling them as much as she liked to listen to them, so she decided to become a writer.  Writing was a job that would allow her to use her imagination and it was something she could do at home.  To make sure that none of her wealthy neighbors knew about her career, Owen used the name Julia Scott when she wrote.

Owen started her career by writing news for a local newspaper and later stories for magazines. In the beginning Owen wrote romance stories that appealed to the growing number of woman readers. Some of these early stories included wealthy characters that lived in large cities like Philadelphia and New York.  Later, Mary began to write stories with characters based on people she had known as a child.  One of her best-known stories “The Taming of Tarias,” was set in St. Joseph.  It was a love story about a man from Kentucky, like her father, and a woman who was part Native American and part French American.

In 1889 Owen read a collection of Native American stories published by Charles Godfrey Leland called Algonquin Legends.  Some of the legends in the book were very similar to the ones she heard enslaved people tell when she was young.  Others were like the legends she learned while visiting Native American villages across the Missouri River from St. Joseph. 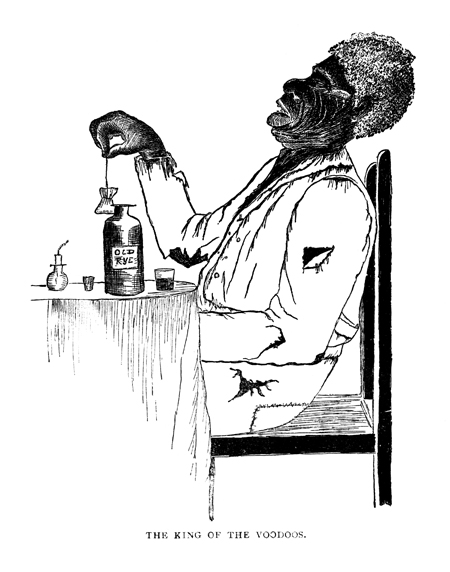 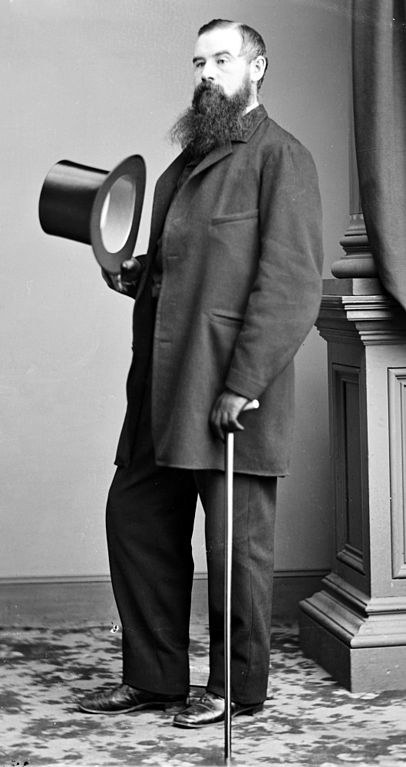 Owen knew many of these legends and wrote about one in a letter to the famous folklorist, Charles Leland, who lived in Italy.  This letter started a friendship that lasted for fifteen years. Charles was very excited to receive the information and encouraged Mary to write down as many legends as she could remember.

Leland was also interested in magic and conjuring, which many white people of the time called Voodoo.  When he learned that Owen had grown up with a conjurer, he asked her to write a book about it and invited her to travel to London for an International Folklore Congress in 1891. At the congress, Mary read an article she had written called “Among the Voodoos.”  In her presentation, she talked about Mymee Whitehead and another conjurer she interviewed many times, King Alexander.  King Alexander was part Black and part Native American.  He told Mary about the art of hoodoo and arranged for her to receive some training in conjuring.  Because she was one of few white people who could write about hoodoo from first-hand knowledge, Owen sometimes referred to herself as the only white voodoo in existence. With Charles Leland’s help, Mary Alicia Owen published her first book, Old Rabbit, the Voodoo, and Other Sorcerers in 1893. 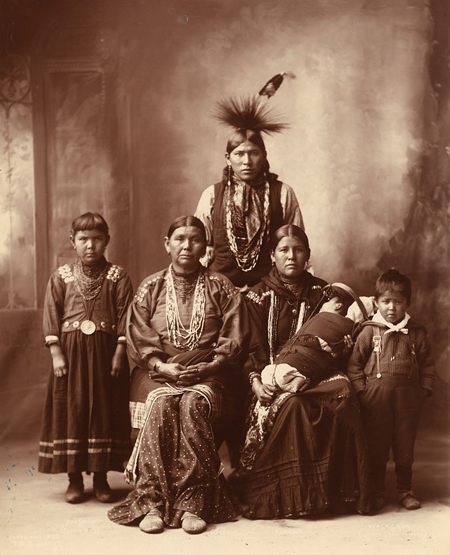 After the publication of Old Rabbit, Owen turned her attention to the folklore of Native Americans. Kickapoo, Ioway and Sac and Fox lived in Kansas on reservations. She estimated that, during her thirties and forties, she made at least one hundred trips visiting these Native Americans.

Owen became especially interested in the Sac and Fox tribe. She traveled to their reservations in Kansas and Oklahoma and also traveled to Iowa to visit the settlement of Fox who call themselves the Musquakie (today is more often spelled Meskwaki).  Owen watched their dances and ceremonies and collected a number of Sac and Fox legends.

Owen made friends with a woman named Mary Lasley who was Ioway and Sac, and Fox.  She helped Lasley publish a number of legends in the Journal of American Folk Lore in 1902.  Two years later, Owen published a book about the Sac and Fox, Folk-lore of the Mesquakie Indians of North America.  During her many visits to Indian reservations, Mary collected Native American pipes, bags, and pieces of traditional clothing.  She gave some of these items to the Folklore Society in England.  In 1931 she gave what remained of her collection to the Missouri State Museum in Jefferson City.

The Folklore of Missouri

During the last three decades of her life, Owen spent much of her time collecting legends and folklore from the period when Missouri was first settled by European Americans.  Owen was old enough to remember the city of St. Joseph and large parts of Missouri as they were before the Civil War.  As she reached the age of sixty, she realized that very few of the old settlers of her hometown were living.

Owen was concerned that the legends and details about Missouri’s past would disappear.  Not only did she work to preserve what she had learned, she began training others to become folklorists too.  She spoke to many clubs and organizations about folklore. In 1906 she became one of the founding members of the Missouri Folklore Society.  Owen also helped organize the St. Joseph Folklore Society and started the Mary Alicia Owen Story Teller’s League to encourage women to write fiction. 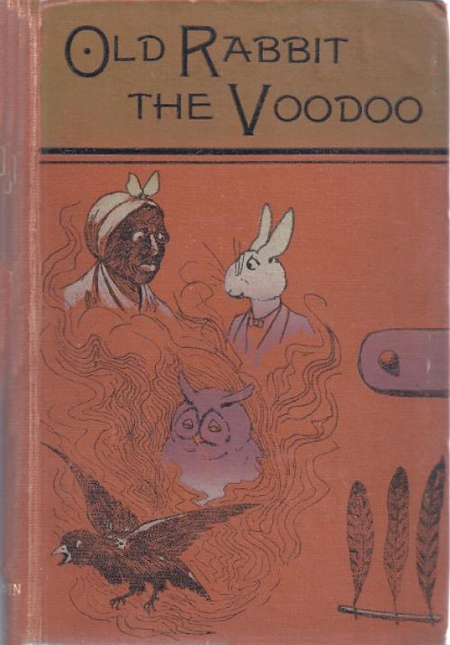 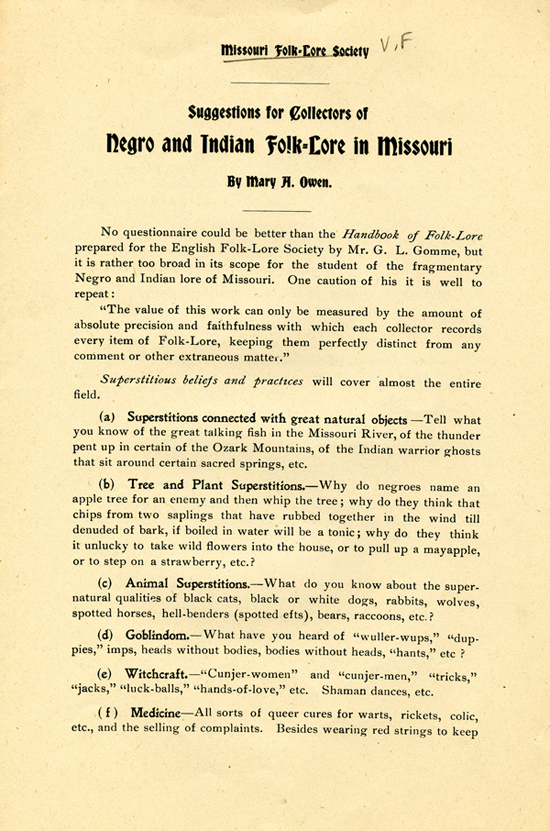 Owen spent the last years of her life living in her childhood home with her sisters Luella, who became a well-known geologist, and Juliette, who was an artist and ornithologist.  Mary Alicia Owen died at home just three weeks before her eighty-fifth birthday, on January 5, 1935.  She is buried in the Owen family mausoleum in Mount Mora Cemetery in St. Joseph. 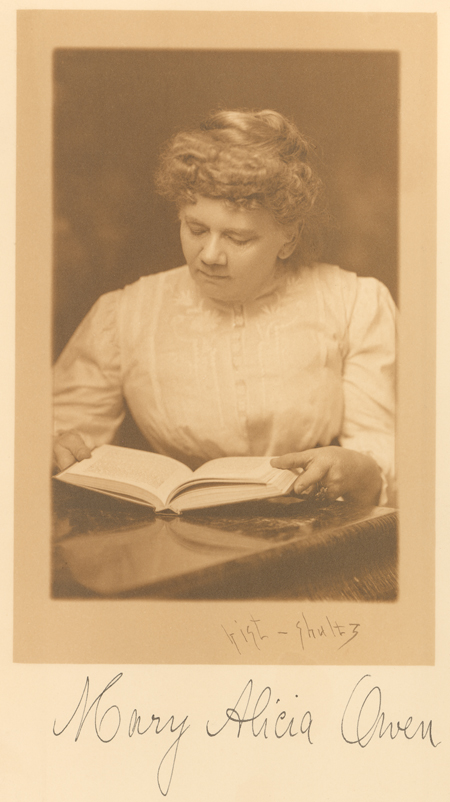 During her long career, Mary Alicia Owen wrote one novel and a play, several short stories, and many books and articles about folklore.  Her works remain important though some modern folklorists consider her work to be racist. Owen, like many people of her time, did not believe that African Americans and Native Americans were as civilized as European Americans. Some of Owen’s work with African Americans continues to be valuable because she recorded customs and ceremonies that are no longer held today.  Pieces she wrote about Missouri’s pioneers are also still significant, especially an article she wrote for the State Historical Society of Missouri called “Social Customs and Usages in Missouri During the Last Century.”

The following is a selected list of books, articles, and manuscripts about Mary Alicia Owen in the research centers of The State Historical Society of Missouri. The Society’s call numbers follow the citations in brackets.