Fred V. Heinkel was president of the Missouri Farmers Association from 1940 to 1979. Throughout his life, he worked on behalf of farmers in Missouri and the United States.

Frederick “Fred” Victor Heinkel was born September 22, 1897, on a farm in Jefferson County, Missouri. He was the only child of William and Cora Belle McDaniel Heinkel. In 1904, when Fred was about seven years old, the family moved to Franklin County, Missouri, where he attended school through the sixth grade. Like many farm children at the time, he left school after completing the sixth grade so that he could help on the family farm. He later earned his high school equivalency diploma and even went on to earn his teaching certificate, but he never returned to school and he never worked as a teacher. Instead, Heinkel continued to work on the family farm until his father’s death in 1936.

In 1917 he attended a lecture by William Hirth, founder and president of the Missouri Farmers Association (MFA). The MFA was part of the growing farmers’ cooperative movement, in which farmers formed clubs to conduct their business. By working together, farmers were able to buy goods at lower bulk prices and sell their products more profitably. Heinkel was impressed with Hirth’s argument in favor of farm clubs and cooperatives, and he quickly joined his local club. He became secretary-treasurer of his farm club and was elected president of the Franklin County Farmers Association, his local MFA cooperative.

As the leader of the Franklin County cooperative, Heinkel developed a close relationship with  Hirth, advising him on issues of agricultural politics. In 1936 he was elected vice president of MFA, and when Hirth died in 1940, Heinkel became MFA president. He was reelected to that position every year until 1979.

During Heinkel’s presidency, MFA grew to become a large and successful business involved in all aspects of agriculture. Heinkel oversaw the expansion of the cooperative and led it through several reorganizations. Between 1940 and 1979, MFA’s membership grew from approximately 32,000 to over 175,000 and its annual income grew from $100,000 to $725 million. MFA’s associated businesses, like MFA Oil and MFA Insurance companies, also grew. MFA soon became one of the most successful farmers’ cooperatives in the United States. 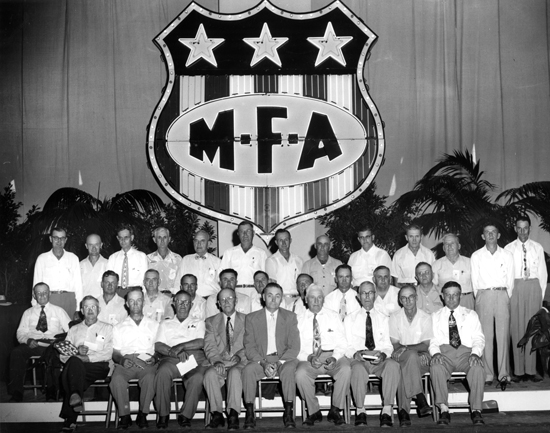 Throughout his career, Heinkel was active in agricultural politics. When the federal government was implementing the New Deal in the 1930s, he became involved in agricultural policies to help farmers, who had been suffering from an economic depression since the 1920s. Farmers were producing more food than could be consumed, leading to low food prices and low incomes. This helped contribute to the depression. During the New Deal, the government stepped in to help regulate prices and incomes by paying farmers not to grow as much of certain crops. This brought prices up enough for farmers to earn a decent living. Heinkel spent much of his career fighting to keep these federal agricultural programs alive.

Heinkel also focused on statewide issues that affected farmers. He lobbied the state government on matters such as building better rural roads, bringing telephone service and electrical power to rural areas, and improving public school systems. He and others in MFA were instrumental in convincing the state to build a four-year medical school at the University of Missouri in Columbia. They believed such a school was needed to train doctors who could eventually provide medical services to people living in rural Missouri. When a severe drought hit Missouri in 1953 and farmers had no hay to feed their livestock, Heinkel and MFA helped by buying emergency supplies of hay from out of state and distributing them to farmers for free.

Heinkel did not marry until 1946, when he was almost fifty years old. His wife, Dorothy C. Hart Riley, was a schoolteacher. Some of Fred’s associates credit her with improving his grammar in his correspondence and other writings as MFA president. 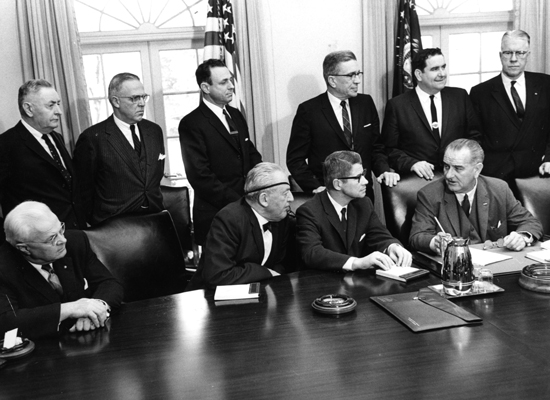 Because of his expertise and political connections, Heinkel was often called upon to work with politicians and other agricultural leaders on issues of state and national importance. He served on many government-related committees, including the University of Missouri Board of Curators, the National Advisory Commission on Food and Fiber, and the Peace Corps National Advisory Council. He also served on committees that studied methods of insect and plant disease control and researched plans for building dams and levees along the Missouri River to help control flooding and harness the river’s power for electricity.

Possibly his greatest political moment, however, came in 1960, when Heinkel met with President John F. Kennedy at the White House. Kennedy was preparing to appoint the next secretary of agriculture, and Heinkel was one of two final candidates. Even though Heinkel was not selected, Kennedy and other politicians continued to consult with him on agricultural issues.

In 1979, one year before he planned to retire, Heinkel lost the MFA presidential election to Eric Thompson. Thompson represented a group of younger MFA employees and members who wanted the cooperative’s leaders to focus less on politics and more on business. Heinkel continued to work for MFA Insurance, now Shelter Insurance, for a few years before retiring.

On October 31, 1990, Heinkel died at Boone Hospital Center in Columbia, Missouri, at the age of ninety-three. Dorothy Heinkel had died a few months before him. The Heinkels are buried in Memorial Park Cemetery in Columbia, Missouri. Though he had no children, Heinkel left a lasting legacy, helping to shape Missouri’s rural landscape through both his political efforts and his business skills. In 2014 MFA celebrated its one hundredth year of operation. The cooperative continues to thrive in no small part due to Fred Heinkel’s thirty-nine years of leadership. 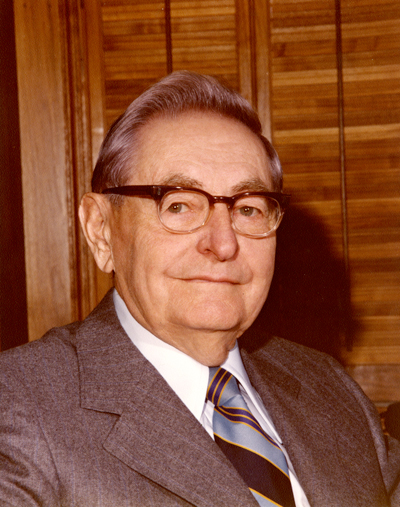 The following is a selected list of books, articles, and manuscripts about Fred V. Heinkel in the research centers of The State Historical Society of Missouri. The Society’s call numbers follow the citations in brackets.