Senator Thomas Hart Benton was a prominent lawyer and political leader during the first half of the 1800s.  During his five terms as a U.S. senator, Benton played a major role in many national debates.  He was a strong supporter of the use of hard money and westward expansion. Benton also fought against the extension of slavery into the territories.

Thomas Hart Benton was born in Hillsborough, North Carolina, on March 14, 1782. He was the first son of Jesse Benton and Ann Gooch. When Thomas was eight years old, his father, a well-respected attorney, died of tuberculosis.

At the age of sixteen, Benton was admitted to the University of North Carolina at Chapel Hill. While he studied hard and was elected to the school’s Philanthropic Society, Benton soon got into trouble. During a quarrel, Benton came close to shooting another student. A few weeks later, he was accused of stealing money from his roommates and was expelled.

Benton returned home and in 1801 moved with his family to Tennessee. He worked on the family farm, taught at a local school, and studied law. In the summer of 1806, Benton passed the Tennessee bar exam and began practicing law. 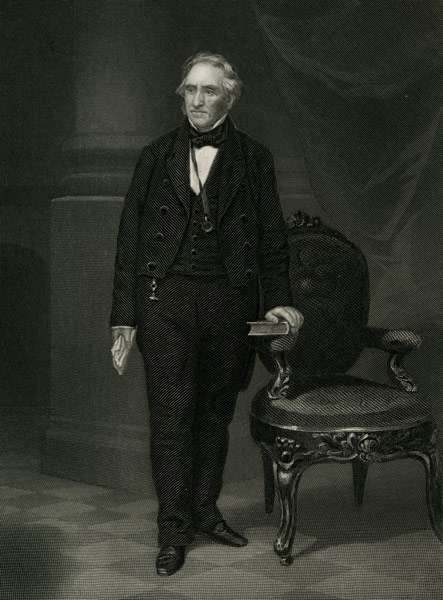 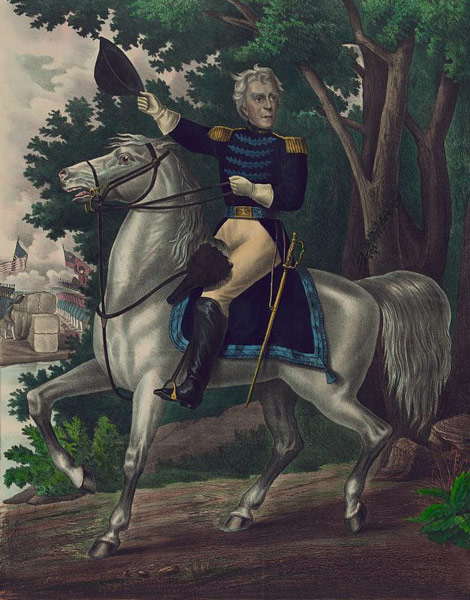 In 1809, at the age of twenty-seven, Benton was elected to the Tennessee legislature. During his one term, he led judicial reforms, helped pass legislation that secured the right for slaves to have a trial by jury, and headed the legislative committee on lands. After his term ended, Benton returned to the practice of law.

During the War of 1812, Benton volunteered for military service and was appointed a colonel in the Tennessee State Militia. He traveled throughout the United States under the direction of Colonel Andrew Jackson, a well-known political figure in Tennessee.

Benton’s two years in the military were a disappointment to him. He never saw combat. In addition, he and his brother Jesse became entangled in a quarrel with the Carroll family and Jackson. The feud ended in a street brawl in Nashville where Benton shot Jackson in the arm. Jackson survived the wound, but the two remained enemies for several years. The quarrel damaged Benton’s reputation in Tennessee. After he was discharged from the military, he decided to move west.

A Move to the Missouri Territory

In the fall of 1815, Benton boarded a riverboat and traveled to St. Louis in the Missouri Territory. He later described himself as an adventurer ready to begin on a new theatre. When Benton arrived in St. Louis, it was a small town with wood and stone buildings lined along three muddy streets. Benton resumed practicing law and soon became involved in the city ‘s business community. At the Bank of St. Louis, Benton met two important men, Charles Gratiot and Rene Chouteau. They introduced him to other important figures in the city, and he quickly became a community leader. 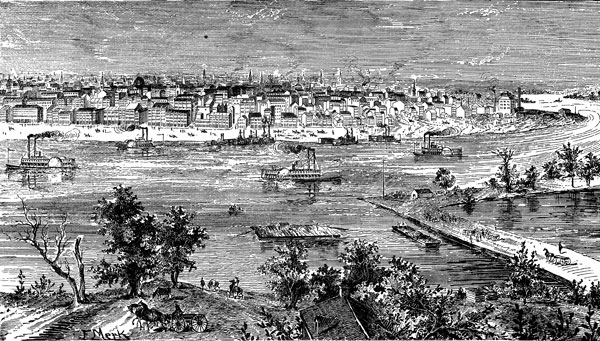 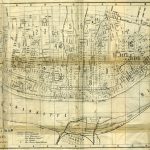 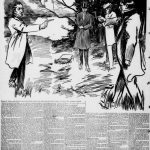 While practicing law, Benton often argued cases against Charles Lucas, a competing attorney. During a heated argument in court in 1817, Benton believed Lucas insulted his honor. He challenged Lucas to a duel, and the pair met on Bloody Island near St. Louis. While the duel ended with no serious injuries, Benton was still upset and requested another duel. In the second duel, Benton killed Lucas with a gunshot to the heart. After this tragic incident, Benton vowed never to duel again.

Benton tried new ventures after his move to Missouri.  In 1818 he founded the St. Louis Enquirer. Benton used his newspaper to launch a political career.  He took strong stances on political issues and earned the respect and attention of many Missourians. 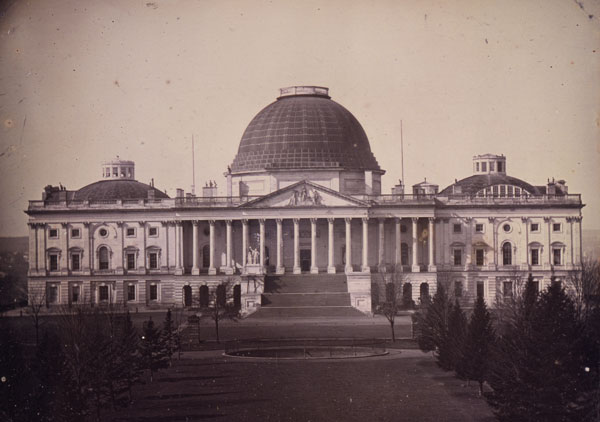 In August 1820, as the Missouri Territory inched closer to statehood following the Missouri Compromise, Benton was elected to the U.S. Senate, the start of a thirty-year career in that chamber.

Benton quickly established himself as an eloquent and powerful speaker and earned the respect of many fellow senators. Because Missouri was not yet a state, Benton was denied full membership in the Senate when he first arrived. In spite of the 1820 Missouri Compromise, disagreements over slavery and the presence of free blacks in Missouri erupted in Congress. Not until August 10, 1821, was Missouri admitted as the twenty-fourth state.

Benton married Elizabeth McDowell on March 20, 1821, in Virginia. She was the daughter of an old family friend. The couple set up their home in St. Louis and started a family. The first of their six children was born in 1822. Daughter Jessie, born in 1824, married John C. Frémont, an explorer of the American West. 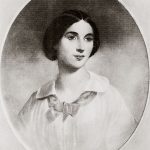 "Old Bullion" in the Senate

When he returned to Washington, DC, Benton plunged back into his job. He attempted to represent a variety of local interests within Missouri such as the fur trade, men who wanted the old Spanish land titles approved, and the lead mining industry. He also introduced legislation that would decrease the sales price of public land the longer it remained unsold.

As the 1824 election approached, Benton became involved in the presidential campaign. He initially supported Henry Clay, a cousin by marriage. After Clay was eliminated from the race, Benton decided to support Andrew Jackson. While he and Jackson had resolved their differences by this time, Benton also recognized Jackson’s popularity in Missouri. Although Jackson lost to John Quincy Adams, Benton helped him win the presidential election four years later.

Benton represented Jackson’s interests on the floor of the Senate. The pair worked tirelessly on banking reforms, and many attribute the success of Jackson’s presidency to Benton. During the 1830s Jackson supported Benton as he fought for hard money in the form of gold and silver coins instead of paper money and bank notes. Benton’s stance on currency earned him the nickname “Old Bullion.”

In the 1840s the status of the Oregon Territory became an important issue. Benton did not voice any strong opinions on the matter until May 1846 when he spent three days addressing “The Oregon Question.” He continued to believe in westward expansion, more commonly called Manifest Destiny, and set out to show “the true extent and nature of our territorial claims beyond the Rocky Mountains.” At the end of his final speech, Benton moved to reintroduce a bill to declare the Oregon Territory under U.S. rule. He had first presented the bill in a secret session of Congress in 1828. The area, also claimed by Great Britain, eventually became a U.S. territory in 1848. 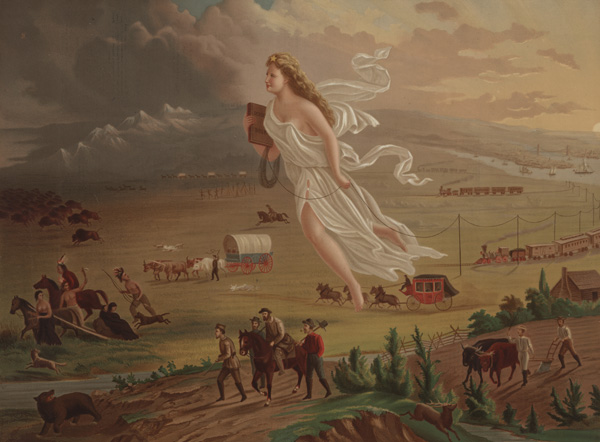 During his years as a senator, Benton became concerned that the issue of slavery would divide the country. He had pushed for Missouri to be admitted as a slave state, viewing the abolition of slavery as dangerous to the union and harmful to blacks.

Around 1835 Benton slowly began to change his views. While he did not view slavery as wrong or wish to abolish it completely, he did not want to see it spread into the territories. 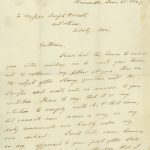 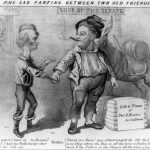 In 1849 Benton traveled around Missouri delivering speeches on slavery. In Jefferson City, he declared, “My personal sentiments, then, are against the institution of slavery, and against its introduction into places in which it does not exist. If there was no slavery in Missouri today, I should oppose its coming in.”

Benton spent his last session in Congress speaking against slavery. This change in position cost Benton much support, and he lost the 1851 senatorial election.

Many people tried to convince Benton to campaign for president in 1852, but he instead chose to run for the U.S House of Representatives. He served one term but was not reelected. Benton ran for governor in 1856, suffering an embarrassing loss. Both of these defeats were likely due to his changed views on slavery.

In 1854 Benton’s wife, Elizabeth, died, leaving him heartbroken. To distract himself from his grief, he undertook a long lecture tour across the U.S. from 1856 to 1857. He gave lectures on slavery, warning listeners of terrible consequences if the North and South did not end their dispute.

After the lecture tour was over, Benton settled into a home in Washington, DC. He devoted the next two years to writing Thirty Years’ View, a commentary on the national political scene during his time as a senator. On April 10, 1858, Benton passed away after a long fight with cancer. Large memorial services were held in both Washington, DC and St. Louis, where Benton was buried in Bellefontaine Cemetery. 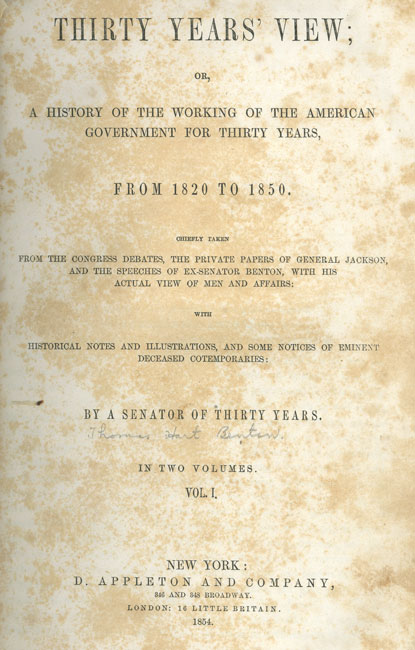 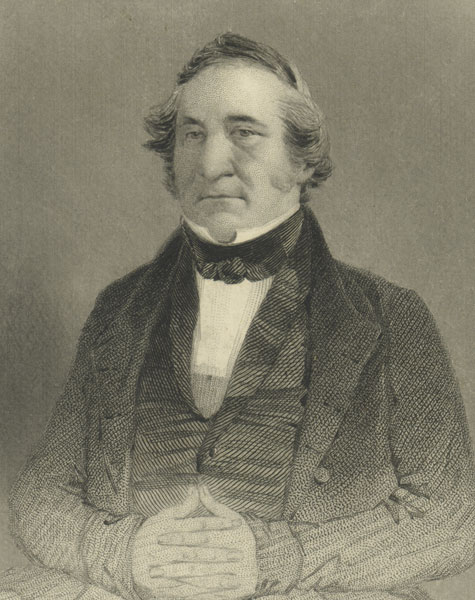 Thomas Hart Benton played a major role in shaping Missouri and the United States. He was the most influential Missouri politician during his thirty years as a senator. Benton also had an impact on the westward expansion of the country.

In 1864 the U.S. government asked each state to send statues of two citizens known for their distinguished civil or military service for the National Statuary Hall. Missouri selected Benton and Francis Blair Jr., and their statues are currently on display in the U.S. Capitol. A park in St. Louis was named after Benton in 1866. Two years later a statue of Benton sculpted by Harriet Hosmer was placed at the center of Lafayette Park in St. Louis.

The following is a selected list of books, articles, and manuscripts about Senator Thomas Hart Benton in the research centers of The State Historical Society of Missouri. The Society’s call numbers follow the citations in brackets. All links will open in a new tab.