T.S. Eliot was a famous poet, literary critic, and playwright. He was one of the pioneers of modernism, a movement in art and literature that was popular in America and Europe in the first half of the twentieth century.

Thomas Stearns Eliot was born on September 26, 1888, in St. Louis, Missouri, to Henry Ware Eliot, a businessman, and Charlotte Champe Stearns, a schoolteacher and amateur poet. Eliot’s grandfather was William Greenleaf Eliot, a famous Unitarian minister, educator, and philanthropist, who died before T.S. Eliot was born. Eliot was raised to follow his grandfather’s religious and moral teachings, like optimism about the future, the innate goodness and progress of mankind, avoiding selfishness, and making personal sacrifices for the good of the greater community.

Eliot was born with a double hernia, a condition where his intestines bulged out of his abdominal wall in two places, so he was not free to play in normal, rambunctious ways with other children. Instead, he developed an early passion for reading and writing. Some of the imagery in his writings was inspired by things he noticed in his surroundings, such as the Mississippi River, pollution, and urban decay near his St. Louis neighborhood, or the vast ocean, sailboats, and beaches near his summer home in Massachusetts.

After starting in a small private school, Eliot transferred in 1898 to Smith Academy, a school founded by his grandfather. While at Smith, Eliot created a homemade magazine and wrote a number of stories for the Smith Academic Record. Eliot later attended Harvard University, where his cousin, Charles William Eliot, was the president. He graduated with a Bachelor of Arts degree in 1909, and then pursued graduate degrees in English and Philosophy.

At Harvard Eliot became a poet and began to write in ways that challenged his family’s moral and religious beliefs. Starting in 1910, his poetry took on themes associated with the modernism movement in art and literature. Modernism focused on the negative aspects of humanity and rejected most themes that were popular in the 1800s, like optimism, progress, beauty, morality, personal strength, and freedom of choice. 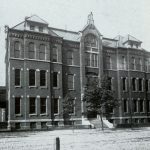 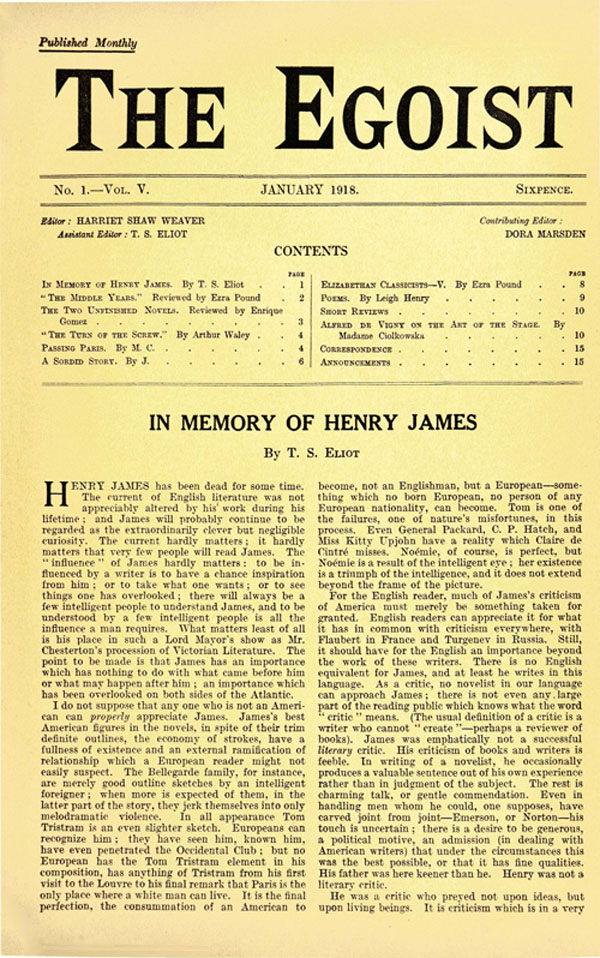 The characters in many of Eliot’s poems were lonely, disconnected from other people, and overly concerned about their own unfulfilled wants and needs, as opposed to being selfless and focusing on the greater good of the community. Many poems were set in the present and paid little attention to past traditions. Instead of optimism and progress, many of his characters felt stuck in difficult situations they were powerless to escape. Eliot’s poems usually stressed the darker side of human nature. Nearly all of these themes can be detected in his breakthrough poem, The Love Song of J. Alfred Prufrock.

Eliot eventually moved to London, England, where he met and married Vivienne Haigh-Wood in 1915. In 1917 Eliot got a job at a bank, published his first book of poetry, Prufrock and Other Observations, and became assistant editor at The Egoist, a literary magazine. Vivienne suffered from severe mental and physical problems, which strained the couple’s marriage and finances until Eliot’s own physical and mental health suffered.

The stress mounted after Eliot’s second book, Poems, was published in 1919. A year later, Eliot had a nervous breakdown. Out of this atmosphere of mental and emotional stress came Eliot’s most famous poem, The Waste Land. The poem was published in 1922 in The Criterion, a new literary magazine created and edited by Eliot. The Waste Land’s themes were extremely dark and hinted at Eliot’s deep emotional distress. In 1925 Eliot became literary editor at the Faber & Gwyer publishing company. That same year, the themes from The Waste Land resurfaced in Eliot’s poem, The Hollow Men, which ends with the line,

“This is the way the world ends
Not with a bang but a whimper.”

In 1927 Eliot joined the Church of England and became an English citizen. His work after this tended to have lighter themes, like the whimsical Old Possum’s Book of Practical Cats in 1939, or religious themes, like Ash Wednesday in 1930, and his last work of poetry, Four Quartets, in 1943. Eliot wrote mainly plays and literary criticism after these publications.

Eliot separated from his wife in 1933. Vivienne was committed to a mental institution in 1938, and died in 1947. In 1957, at age 68, Eliot married his 30-year old secretary, Valerie Fletcher. He lived out the rest of his days happier than he had been since his childhood. A heavy smoker for most of his life, Eliot continually suffered from worsening respiratory problems, and died in London on January 4, 1965.

T. S. Eliot’s writings helped shape modern literature in the twentieth century. In 1948 he was awarded the British Order of Merit and the Nobel Prize for Literature, becoming the only Missourian to date to win a Nobel Prize. Eliot’s play, The Cocktail Party, won the 1950 Tony Award for Best Play. In 1964 he was awarded the Presidential Medal of Freedom. Old Possum’s Book of Practical Cats was adapted in 1981 into the Tony award-winning play Cats.

For more information about T.S. Eliot’s life and career, see the following resources:

The following is a selected list of books, articles, and manuscripts about T.S. Eliot in the research centers of The State Historical Society of Missouri. The Society’s call numbers follow the citations in brackets.