James M. Douglas was a Missouri Supreme Court judge. His judicial career was highlighted by his 1938 election over an opponent backed by a corrupt political machine. This victory led to a change in how Missouri chooses its judges. The new method, commonly known as the Missouri Plan, has been copied by thirty other states.  During his time on the bench Judge Douglas also wrote important opinions on expanding the rights of women teachers and ending a political fight that made way for Forrest Donnell to take office as Missouri’s governor in 1941.

James Marsh Douglas was born in St. Louis on January 6, 1896.  He was one five children born to Walter Bond Douglas, a St. Louis Circuit judge, and Francesca Kimball Douglas.  He attended St. Louis public schools and graduated from Central High School in 1914. He then enrolled in the Washington University Law School at a time when students could earn an undergraduate law degree.  However, he soon left to join the Missouri National Guard.  Initially, Douglas served on the Mexican border in 1916, but after America’s entry into World War I, he was commissioned as second lieutenant in the U.S. Field Artillery, and entered combat in France and Germany. 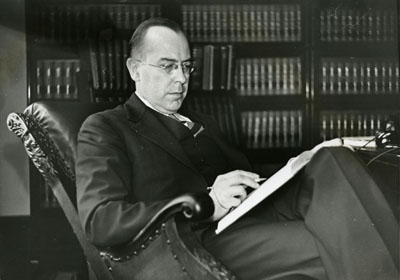 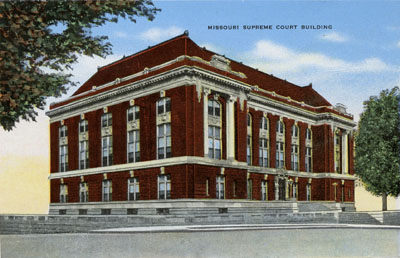 At the war’s end Douglas returned to Washington University, earning his bachelor’s degree in law in 1921.  He soon after joined the firm of Nagel and Kirby, where he practiced for fourteen years.  In 1935 he was elected to the St. Louis Circuit Court as a Democrat. During this time, he lectured at the Washington University Medical College on medical jurisprudence.  He served from 1931 to 1933 as national president of the legal fraternity Phi Delta Phi.  In 1937 Governor Lloyd Stark appointed Douglas to the Missouri Supreme Court.

Douglas was only 41 when Governor Stark appointed him to the High Court, leading the press to refer to him as the Court’s “baby member.”  He was also the only member from St. Louis.

When Douglas arrived in Jefferson City, the Supreme Court was in the midst of a complex and controversial insurance case.  The judges were evenly split 3-3.  After joining the court, Douglas cast the deciding vote against the insurance companies.  The companies in their legal struggles had been secretly helped by an influential Kansas City political boss named Thomas J. Pendergast.  Pendergast led a powerful “machine” whose members helped him control Kansas City government, and, for a time, Missouri state government as well.  Since Pendergast had a personal financial stake in the court’s decision, when Douglas voted against the insurance companies, he became an enemy of the machine and a target for Pendergast.

Douglas’s appointment to the court occurred late in the term and after serving only one year he was, by law, up for election.  Pendergast took this opportunity to take revenge on both Douglas and Governor Stark, feeling the governor had betrayed his earlier political support.  Pendergast recruited a judge from southeast Missouri, James V. Billings, to oppose Douglas in the election.

Although the candidates formally competing against each other were Billings and Douglas, it soon became clear that these two men had become surrogates in a political struggle between the governor and the boss.  The political machine campaigned ferociously against Douglas, and Governor Stark campaigned just as ruthlessly against Billings.  On election day, Douglas defeated Billings. Douglas’s victory marked the beginning of the downfall of boss control in Kansas City and, to a degree, St. Louis as well.  Pendergast’s failure to purge Douglas from the Supreme Court helped lead to the new method of selecting judges based on merit rather than politics. This nonpartisan court plan has been widely imitated across the United States. 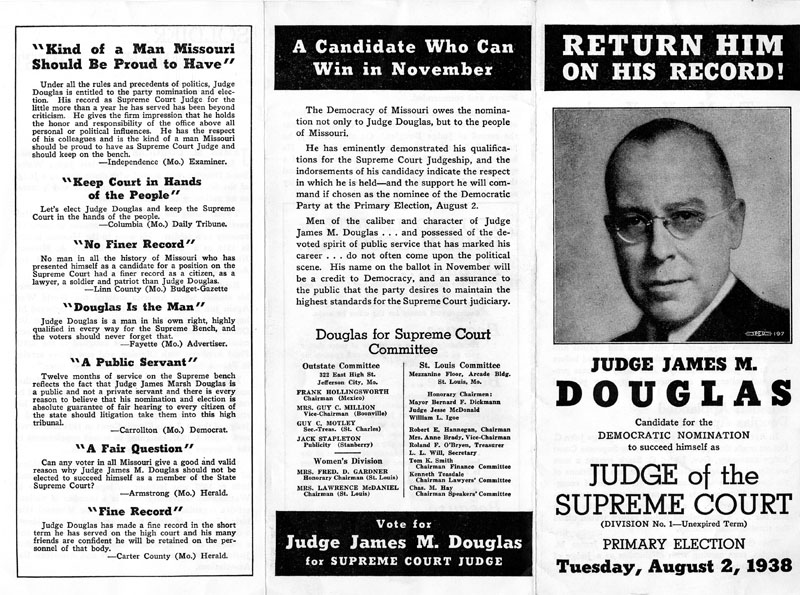 Following his election, Douglas earned a reputation as an excellent jurist and served as chief justice from 1943 to 1945.  He wrote two particularly notable opinions during his twelve years on the Court.  In 1940 Republican Forrest C. Donnell was elected governor, but the Democrats in the House of Representatives refused to legally recognize his victory, as required by law. They successfully kept Donnell from being governor for six weeks.  The Supreme Court ruled that the House’s action was unconstitutional.  A second case concerned the employment of women as teachers.  In 1947 two women sued the St. Louis Board of Education because it forbade married women from teaching in St. Louis’s public schools.  When the case reached the high court, Douglas wrote a unanimous opinion striking down the discriminatory rule.

In 1939 Douglas married Mary Elizabeth Lumaghi, with whom he had a son, James Kimball Douglas, three years later.

Douglas resigned from the Supreme Court on December 31, 1949, and returned to St. Louis to become a partner in the firm Thompson, Mitchell, Thompson & Douglas. His court service was acknowledged in 1950 when the University of Missouri Alumni Association honored him with a citation of merit “for outstanding achievement and meritorious service in law.”  In 1951 Douglas received the annual award of the Lawyers Association of St. Louis, Missouri.

Douglas also had extensive civic involvement beyond his legal profession.  His activities included being a member of the United States Territorial Commission, which was in charge of erecting the St. Louis riverfront memorial, later popularly known as “The Gateway Arch.”  He was also chairman of the task force on legal services and procedures of the “Little Hoover” Commission, a Missouri government reorganization task force.  In addition, Douglas served as president of the Missouri Historical Society from 1940 to 1945.

Douglas died in St. Louis on December 3, 1974, and was buried in Saint Ferdinand Cemetery in Hazelwood, Missouri.

The following is a selected list of books, articles, and manuscripts about James M. Douglas in the research centers of The State Historical Society of Missouri. The Society’s call numbers follow the citations in brackets.