Daniel Robert Fitzpatrick was one of the most important editorial cartoonists in the United States. He was born in Superior, Wisconsin, on March 5, 1891, to Patrick and Delia Ann Clark Fitzpatrick.

As a young man, Fitzpatrick dropped out of high school. He later said he left school because his love of history was not encouraged. When his mother discovered that he had dropped out, she asked, “What do you think you’re going to grow up to be?” Fitzpatrick retorted, “An editorial cartoonist.”

He studied anatomy and life drawing for two years at the Art Institute of Chicago before getting his first cartooning job at the Chicago Daily-News. In 1913 he married Lee Ann Dressen, and then took a job at the St. Louis Post-Dispatch where he remained until his retirement in 1958.

This cartoon ran during the sharecroppers’ protest along Highways 60 and 61 in southeast Missouri in January of 1939. Fifteen hundred evicted sharecroppers (both black and white) camped along the roadsides to call public attention to their plight. The sharecroppers had been evicted by landowners who were given federal funds to leave farmland fallow. To avoid sharing the government checks, many planters evicted the families who had farmed their land. In the editorial that accompanied the cartoon, the St. Louis Post-Dispatch expressed outrage at the situation:

“It was patently wrong to allow those who had done most of the actual work of raising crops to be dispossessed, even though they had no legal title to the land.” 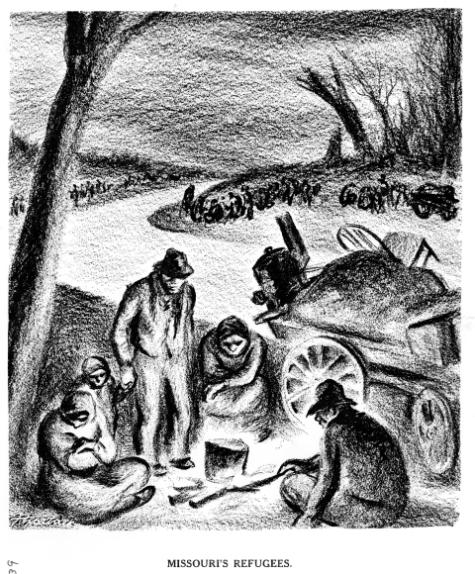 Universally acknowledged as the dean of editorial cartoonists, “Fitz” strongly supported the rights of the underdog while attacking the conservative “establishment.” Through cartoons with messages on equal rights for women and blacks, a clean environment, and concern for the militarization of America’s post-World War II foreign policies, he gained the admiration and respect of scholars, journalists, statesmen, and regular newspaper readers worldwide.

Fitzpatrick, never one to shy away from controversial subjects, earned the ire of a Missouri judge for a cartoon that chastised the courts after a criminal case against an alleged extortionist was dismissed. Fitzpatrick and Ralph Coghlan, editor of the Post-Dispatch editorial page, were fined and sentenced to jail for contempt of court. The decision was later reversed on appeal to the Missouri Supreme Court.

As Adolph Hitler rose to power in Germany during the 1930s, Fitzpatrick anticipated a second world war. In response, he created powerful cartoons that often depicted the threat of Hitler’s Nazi war machine in the form of a giant swastika rolling across Europe. His sophisticated and forceful use of imagery helped turn American public opinion against Hitler and Nazi Germany. 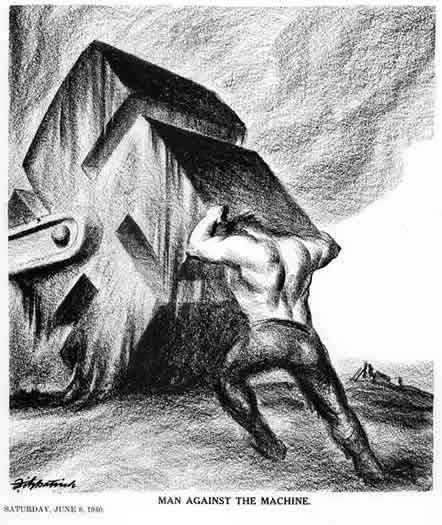 Published in 1940, this Fitzpatrick cartoon depicts mankind struggling against a Nazi Swastika. Earlier in the year Hitler’s armies had invaded and occupied Poland, Denmark, Norway, France, Luxembourg, the Netherlands, and Belgium. The United States declared war on Germany in late 1941.

On the domestic front, Fitzpatrick challenged Kansas City political boss Tom Pendergast’s control of Missouri politics in a series of bold and provocative cartoons. The artist brought a similar awareness to political corruption in St. Louis through his “Rat Alley” series.

Fitzpatrick’s success was not only the result of his own creative genius; he also had the support of Post-Dispatch publisher and editor Joseph Pulitzer Jr. Fitzpatrick and Pulitzer agreed that the artist would not have to draw editorial cartoons that differed from his own personal beliefs. This allowed Fitzpatrick to take special leave from the newspaper when the Post-Dispatch supported presidential candidate Alf Landon over Franklin D. Roosevelt and Thomas E. Dewey over Harry S. Truman. 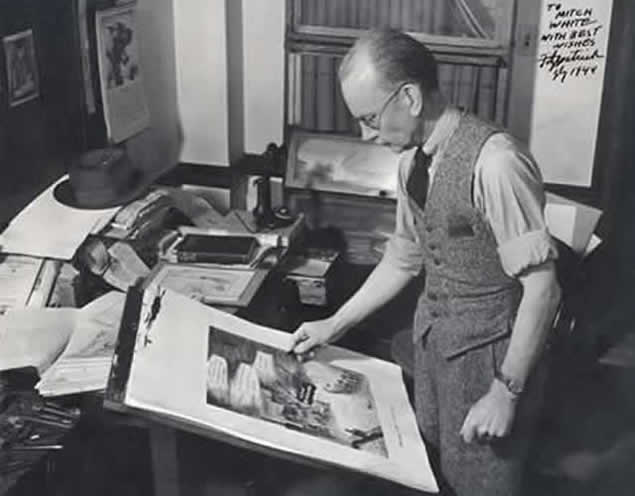 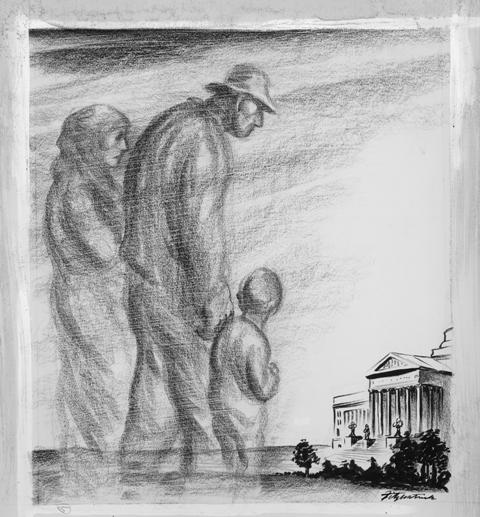 In the fall of 1933 President Franklin Roosevelt was still working to pass much of his New Deal legislation. The president sought to implement new federal programs and regulations that socialized certain aspects of the “free market.” States, likewise, felt pressure to provide government-funded relief to their residents.

As federal and state legislatures debated these measures, the country continued to witness the devastating toll the depression was taking on America’s poor. Millions were unemployed, and thousands of families were hungry and homeless.

Fitzpatrick visualizes the human cost of the crisis as a giant ghostly family of poor Missourians approaching the State Capitol. While legislators debated the merits of relief programs, many felt unable to ignore the suffering of the poor, who were so visibly devastated by the economic crisis.

During his lengthy career, Fitzpatrick’s cartoons were syndicated in thirty-five newspapers in the United States. He won the Pulitzer Prize for editorial cartooning in 1926 and 1955.

Aware of his contribution to twentieth-century history, Fitzpatrick donated 1,750 original drawings to The State Historical Society of Missouri in 1946.

Daniel Fitzpatrick died after a long illness on May 18, 1969, in St. Louis, Missouri. His body was given to the Washington University School of Medicine. Fitzpatrick’s artwork continues to inspire new generations of editorial cartoonists.

The following is a selected list of books, articles, and manuscripts about Daniel R. Fitzpatrick in the research centers of The State Historical Society of Missouri. The Society’s call numbers follow the citations in brackets.