Manuel Lisa was a merchant and fur trader. In 1807 Lisa led the first trading expedition to the upper Missouri River in what is now Montana in search of new trading and fur-trapping opportunities. An ambitious risk-taker, Lisa told William Clark, “I go a great distance, while some are considering whether they will start today or tomorrow.” He became an important figure in the fur trade but died without achieving the financial success he sought.

Manuel Lisa was born on September 8, 1772, in New Orleans to Christobal de Lisa and Maria Ignacia Rodriguez Lisa. His father, a native of Murcia, Spain, worked for the Spanish government. Very little is known about Lisa’s early life and education.

In 1796 Lisa married Polly Charles Chew and became stepfather to her daughter Rachel. Together the couple had two sons, Raymond and Manuel. Three years later, in 1799, Lisa and his family settled permanently in St. Louis, then a small village. Its location near the confluence of the Missouri and Mississippi rivers made it the center of the thriving fur trade.

One of the oldest industries in North America, the fur trade began when Europeans traded goods such as tools and firearms with Native Americans in exchange for furs and pelts. Beaver pelts were used to make felt hats and provide trim for clothing worn by wealthy and fashionable Americans and Europeans. 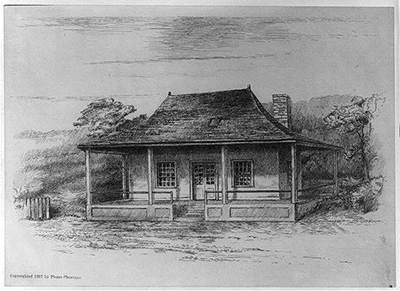 Europeans and, later, Americans organized fur-trading companies that employed men to trap fur-bearing animals for their pelts and hides, though companies continued to trade goods with Indians for hides. Overtrapping led to the decline of fur-bearing animals in the eastern half of North America, forcing fur trappers to travel farther west to find new, unexploited animal populations.

The prominent and powerful Chouteau family of St. Louis held a firm grip on much of the western fur trade, but Lisa was determined to enter the lucrative business. Using information gathered from Lewis and Clark upon their return to St. Louis in 1806, Lisa and his men traveled to the headwaters of the Missouri River in what is now Montana in search of new fur trapping opportunities. At the junction of the Bighorn and Yellowstone rivers he established Fort Raymond, the first trading post in the region. 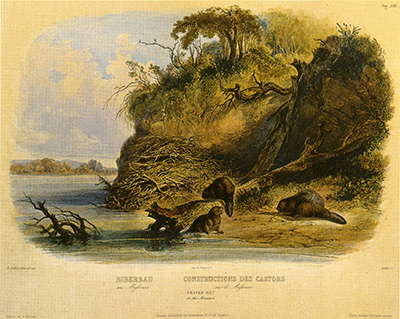 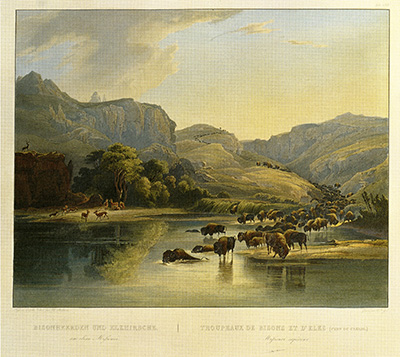 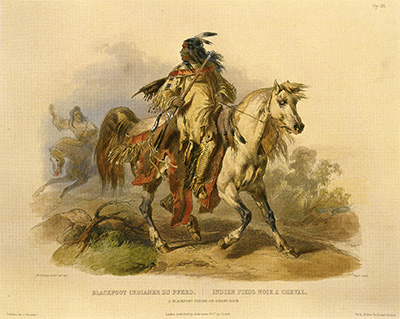 More than two decades after Manuel Lisa first traveled to Montana, Swiss artist Karl Bodmer accompanied German Prince Maximilian Alexander Philipp of Wied-Neuwied on an expedition up the Missouri River. Bodmer painted and sketched the natural landscape and the animals that inhabited it. Bodmer was one of the first artists to bring accurate, colorful images of the American West to American and European audiences.

One of Bodmer’s illustrations depicts beavers building a dam on the Missouri River. Beavers were the lifeblood of the fur trade until the 1830s when silk hats became more popular than felt hats made from beaver pelts.

When Manuel Lisa traveled up the Missouri River in search of new trapping opportunities, he found more than just beavers, otters, foxes, and minks. Vast herds of elk, buffalo, and pronghorn roamed the Great Plains. These herds still existed two decades later when Karl Bodmer recorded his own observations of western wildlife, but by the end of the century, many species were dwindling in numbers due to overexploitation.

Just like Manuel Lisa, artist Karl Bodmer encountered many Native American tribes on his foray into the upper Missouri River region. In one illustration, Bodmer depicted a Blackfoot warrior on horseback. The Blackfoot were among the tribes that opposed Lisa and the Missouri Fur Company.

Emboldened by the promise of the upper Missouri River region, Lisa returned to St. Louis and partnered with leading citizens such as William Clark, Pierre Chouteau, and Auguste Pierre Chouteau to form the Missouri Fur Company. He personally led each of the company’s expeditions, but the venture experienced financial problems and opposition from hostile Indian tribes, leading to the company’s failure.

In 1812 William Clark, then governor of the Missouri Territory, appointed Lisa an Indian subagent. As a subagent, Lisa served as a representative of the federal government to Native American tribes. While working among the Omaha, Lisa married the chieftain’s daughter, Mitain, even though he was still married to his first wife, Polly. It was not uncommon for men in the fur trade to marry Native American women because it helped solidify trade agreements between traders and tribes. The couple had two children together, Rosalie and Christopher.

After Polly Lisa’s death in 1818, Lisa married a widow named Mary Hempstead Keeney. The following year, Lisa reestablished the Missouri Fur Company, but it failed once more. In debt, Lisa died of an unknown illness in St. Louis on August 12, 1820, and is buried in Bellefontaine Cemetery.

By spearheading the first commercial expedition to the upper Missouri River region, Manuel Lisa helped expand the western fur trade. Although he was financially unsuccessful, Lisa’s efforts helped his successors, among them the American Fur Company and the Rocky Mountain Fur Company, to flourish.

For more information about Manuel Lisa’s life and career, see the following resources:

The following is a selected list of books, articles, and manuscripts about Manuel Lisa in the research centers of The State Historical Society of Missouri. The Society’s call numbers follow the citations in brackets.